What is PCB fuse holder? 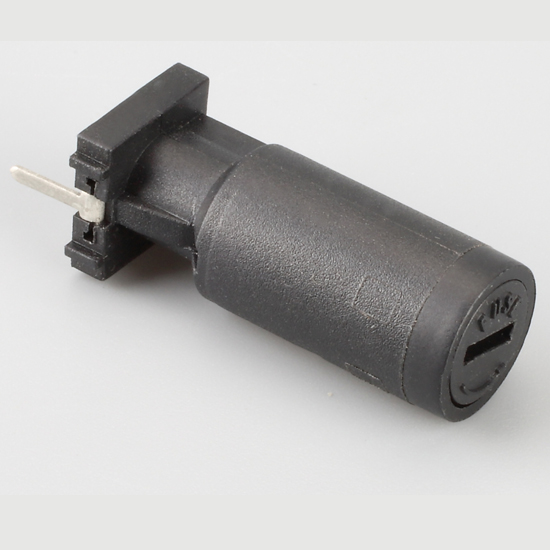 Below are the answers collected by PCB fuse factory for your reference:

Two metal clips and possible supporting insulators that solder to a PCB (printed Circuit board) to hold a cylindrical fuse (like a 1″ x 1/4″ dia 3AG fuse).

The fuse holder is a an electronics component that is installed on a printed circuit board and allows for quick and easy replacement of certain fuses. It may be installed by through-hole installation (pins at either end of the fuse traverse the plane of the board in a plated through-hole (PTH) barrel that runs through the board). Fuse holders can also be installed by surface mount installation (SMT) where the two terminals or ends of the fuse holder are soldered onto pads/lands on the board surface.

The fuses in these cases are usually the cylindrical glass kind and typically through-hole format. The holder allows for swapping out or replacing, fuses that have gone bad or blown open.

An open condition occurs when a small conductive bridge within the fuse is broken as too much current passes through it, breaking conductivity as an open circuit (resistance in ohms = OL (over limit) on a multimeter = open condition = no current flowing).

There are also small surface mount chip components that serve as fuses (not fuse holders) on printed circuit boards for small battery operated devices. The SMT fuse as a chip doesn’t require a holder, it’s soldered directly to the board. In essence it acts like a collapsible portion of a circuit trace.

The fuse can be found close to the (+) and (-) poles from the batteries and one might expect to find printed next to the fuse, “F1” For example a fuse chip could open at 1 amp of current if, e.g., there is a defective battery (not too common). These are inexpensive solutions for building electronic devices, such as those with medical purposes (medical devices) which must have some electrical fail-safe device, or devices with decent probability of an over-current condition, such as audio amplifiers, and where replacement of the fuse should not involve disassembly of the chassis or enclosure to reach the circuit board.

The fuse prevent damages to every component in series (connected directly) with the fuse, or are situated “downstream” from it, protecting those components by blowing open ending current flow, so to speak. However, the low cost means a trade off because when one of these fuses blows open, soldering on a replacement is required. This is not as convenient as a fuse holder or may require return for service from the manufacturer.

A PCB fuse holder is typically a couple of spring clips that are soldered onto a printed circuit board and are spaced a specific distance apart to hold a cartridge type of fuse.